A brief history of Romsey Abbey

The Abbey Church of St Mary and St Ethelflaeda can trace its origins back to 907 AD, the year in which King Edward the Elder, son of the Saxon King Alfred the Great, first settled some nuns here under the charge of his daughter Elflaeda. King Edgar refounded the nunnery circa 960 under the rule of St. Benedict. Ethelflaeda, whose reputed acts of sanctity included chanting Psalms whilst standing naked in the River Test at night, was the second Abbess.

The first stone church and nunnery were built c. 1000 AD and flourished as a place of education for the daughters of kings and noblemen. Work began on the present building c. 1120-1140 with the Choir, Transepts, a Lady Chapel at the East end and first three bays of the Nave, a fourth being added in 1150-1180. The last three arches, in the Early English style, at the West end of the Nave were added in 1230-1240, at which time over 100 nuns belonged to the foundation.

In 1349, however, the Black Death decimated the population at large and, at the Abbey, the number of nuns declined to just 19. Its dark shadow had receded by the turn of the Fifteen Century, during which a second aisle on the North side of the Abbey was built to accommodate a church, dedicated to St. Lawrence, for the townspeople.

Were it not for this shared use of the building, indeed, Romsey Abbey might have suffered demolition under the general dissolution of the monasteries instigated by Henry VIII after his final break with Rome in the late 1530’s. The Abbey was suppressed, its nun dispersed and the Lady Chapel was demolished in 1539 but, in 1544, the townspeople were allowed to buy the building for £100 to be used as their parish church. They later demolished the extra aisle previously built for them because the Abbey was already too large for their needs and resources.

Further changes to the fabric occured during the English Civil War when, in 1643, Parliamentary troops entered the Abbey, pulling up the seats and destroying the organ.

A Puritan form of worship was imposed under the régime led by Cromwell and many independent minsters, including the ‘intruder’ John Warren at Romsey, were appointed.

The Eighteen Century witnessed a long period of neglect. A visitor complained in 1742, for instance, that at least 40 windows were bricked up.

In the Nineteenth, however, particularly under the ministry of the Rev. Edward Lyon Berthon (1860-1892), a renaissance of the Abbey began that has continued to this day.

The Abbey remains the largest parish church in Hampshire and is affiliated to the Greater Churches group, which includes Beverley Minster, Christchurch Priory, Leeds Parish Church and Sherborne Abbey. Its Vicar, Canon Neil Crawford-Jones, is assisted by an Assistant Curate, the Rev. Christopher Rankine and two Non-Stipendiary Ministers, the Rev. David Williams and the Rev. Bryan Taphouse. His team is augmented by a team of retired clergy, vergers, lay readers, churchwardens, sidesmen and servers. 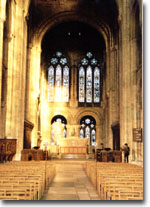